A Villian on the Tye

My new Villian S just arrived. I went straight to the Top Tye. The Tye River in Washington is a classic class V run high in the Skykomish river drainage. Clean cross-grain boofs over pounding holes is what this run is all about. Throw in some steep boulder gardens and about 600 cfs and well, you got a party on your hands!!

The Tye starts with some warm-up drops nestled in the bedrock, right next to Highway 2. Though the highway is close, you rarely feel it's presence. You know it's on when you arrive at Double-Drop! Double Drop leads about 20 feet downstream into The Spout, which flows straight into Skin-So-Soft. All of these are tricky. When running The Spout one wants to stay left, to not end up in the little room at the bottom. There are hand holds if ya get stuck, though ;) 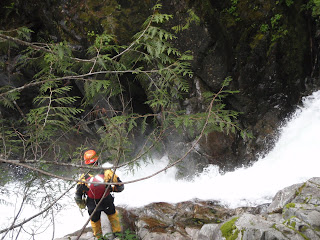 Dave sets safety at The Spout 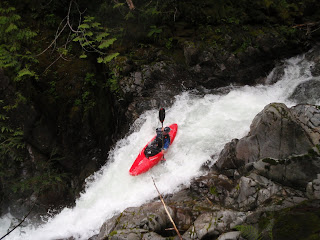 Rob Mckibbin spouting off at The Spout

Monkey Cage Falls is the next big drop. At about 20 feet tall, this falls has a bonus flake on the right, making it possible to boof the same drop TWICE on the way down!! Monkey Cage is one of my favorite drops, ever. Another bonus is the forest service built trails right around this section of river. This makes putting in at Monkey Cage a great option if The Spout is lookin' boney. Such a fun scene. Getting dressed in the parking lot while all the RV'ers and everybody gets excited, because they know your going to run all the "crazy whitewater" they just saw! I love it. I won't even go into the scenery. This is one of my favorite places. Monkey Cage gets its name from the observation deck the FS put up so the normal people can watch us!! Not really, but it's a fun thought ; 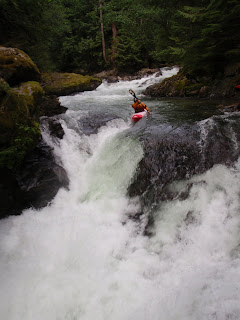 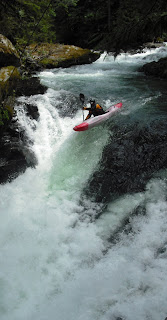 The Top Tye is always a good a time. I couldn't think of a more fun run to try a new boat on. Monkey Cage is a great drop, but hitting the line right isn't a gimme. Too far right and you hit the wall. Too far left? You might miss the shelf and wrinkle your bow on the shallow left side. I like to hug the right rock as I roll to the edge, holding a left stroke just a little as I reach for the lip with that right paddle blade. As I come off the lip I'm looking for the flake. Did I mention how fun this drop is? 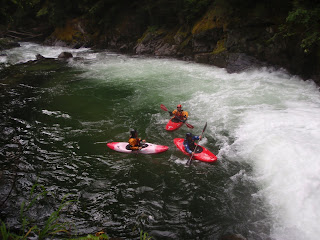 The Skykomish drainage is full of this kind of stuff!!

After Monkey Cage the Tye flows through a cool drop called Crack In The Earth. Basically, the bedrock split open and made about a 5 foot wide crack. It's hard, it's scary, most people just walk it. Downstream is a sneaky little 6 foot boof I call Meat Locker. That thing will work you bad if you don't boof out over the hole. Then some cool little canyon boogie on the way to Log Choke Falls. I've done this run about 20 times in the last 2 weeks. It does not get old. Log Choke is a 35 foot sorta clean waterfall with some issues. Like the name implies there's wood. Less than in years past, but it still has a big old growth stuffed in the left side, pointed right at the entry. If that wasn't enough, the rock shelf at the bottom that juts out into the landing zone will assure you that you want to walk around this one. The last time I was here Rob Mckibben decided he would test his Super-champ powers and run it. He's still da champ. 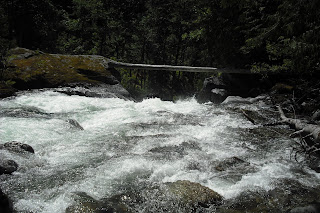 If you haven't eddied out before you see this,

Immediately below Log Choke is Box Drop, a super fun 15 foot waterfall with a kicker that will paste a smile on your face every time. Sometimes when I'm at the bottom of Log Choke Falls peeling out of the eddy, as the kicker comes into view I feel like I'm standing next to Bob Barker on the old Price Is Right game show and ol'Johnny Olson yells out, "A NEW CARRRRR!!!" and the stage curtains fly open. POW!! off the kicker into a big pool. 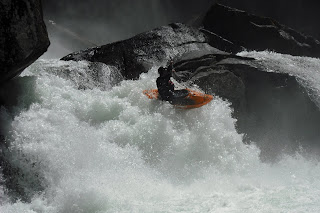 I know I keep talking about the Tye... down through more big drops like Initiation, Stairway To Heaven, Paranoia, Godzilla... and how great it is. In a similar way I can compare the features of the Villian S. Nimble, lightning fast, and responsive are three great characteristics molded into the boat. I've paddled the Super Hero for the last year. I've also lost aboout 30 pounds which is a big shift for me. At 5'8" I now weigh 165 and while I can paddle the Super Hero just fine, the refined characteristics of the Villian S make paddling even more effortless. 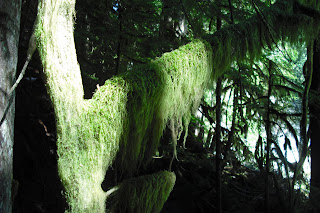 This stuff is everywhere.

The Villian S doesn't have quite the primary stability that the Super Hero does, but I found a cure. Just relax. This boat just goes right where I want it to. I just have to trust it. I noticed the bow would bounce sometimes with the Super Hero and I was curious how the Villian S would do. It carries a good mix, being able to slice through the bigger stuff while staying on top of the smaller stuff to keep my bow out of the rocks just under the surface. It has rails for carving, they're soft. I come from a playboating background so I'm used to edges. Edges are predictable for me. EJ's done it again with this latest design. It has enough edge to carve past big holes and not get tripped up in powerful hydraulics, while at the same time being able to catch tiny one boat eddies. I haven't found what this boat does poorly. Even on portages the Villian excels. How can you make a portage easier? With a nifty little Jackson grab handle, assuring me I won't lose my grip. Rounding it out with bomber plastic and an un-holey hull, the Villian comes out on top!!

Thanks to everyone at Jackson Kayak for making the best boats in the world. I thank you guys every time I put on.
Posted by Brett Barton at 9:29 PM