Idaho is an amazing wilderness playground. Many many miles of wilderness self support can be found here. Fellow stout killer and Creeksides enthusiast, Chris Totten, sends in this TR on a pretty sick stretch at a level known as "bloated". Bloated is a  river level few paddle and even less know of. 'Bloated' is a condition or state a river achieves when there is so much water the riverbed can't maintain its shape and actually swells outward, causing a 'bloated' state known as "River Bloating".

And Creeksiders, while always up for stoking the fire, never like like to inflate the ego. This is why I speak of such fabled happenings. So you may know the true fortune of these paddlers. Gorge beasts love the flavor of human ego. They can smell it in the air and taste the sweet salty flavor in the water. Creeksiders marvel at the Gorge Beast, but know it's ancient power and strength. How, do you wonder, did you get pulled back into that pourover when you were SURE you STOMPED the SHNIZZ out of it?? mmm, Gorge Beast. Make sure and paddle where you should. Chris was, and here's the story...

Jeff called and the trip was on ! It was Thursday and we had till Monday to go to Idaho and paddle 70 something miles from the headwaters of the Secesh turning the corner and paddling the 30 mile South Fork Salmon Canyon to the confluence of the main and out 20+ miles to Vinager Creek. The water in Idaho had been high and the Idaho boys were running things huge over there this year. As we watched gages, Jeff was confident we would have good water. "Too low" was not my concern... So with our time crunch and my dedication to my habit, I called in sick to work and we bailed for Idaho. We made the drive to McCall and crashed at Jared Alexander's house who was going to be our guide down the Secesh. Jared is a big water local legend and had just run the Payette at 8,000cfs. The next morning we woke up and loaded our gear. A friend calls Jared and the group is now 4 thanks to Boyce the owner of Liquid Logic Kayaks. Jared and Boyce would paddle with us down the Secech to 5 miles above the SF Salmon to the only road out, before Jeff and I would paddle down the remote SF canyon on our own. On the way to the put in we drove through the hills on a dirt road and stopped at a bridge where the Secech was flat meadering through the meadows. This was the last piece of flatwater I would see for three days. Jared looked at the gage and said with disgust " ah man, 4.6 this is the lowest I have ever paddled the Secesh" I think, "good, low." 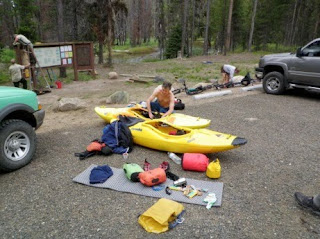 Once we got up into the mountains we came to the put in on the other side of the meadow where the Secesh flowed off the other side of the pass. Packing quickly because the shuttle driver was taking our rig, I forget my spare paddle and some food. Minor loss for three days. I jumped in my boat with gear in back and my sleeping bag between my legs and had a good couple of miles to get used to my loaded creek boat. The flat water soon tilted down hill and we seemed to be paddling on about 1,000 cfs. With all the tribs coming in the flow would double by the time we dumped into the South Fork Canyon at what we thought was around 7,000 cfs. Felt like 12,000 in some spots. The Secesh picked up more water AND gradient. The next 15 or so miles was non stop continuous read and run class IV-V My little cursor through it all was following Jared's yellow helmet bashing through holes and twisting around blind corners. Once we got into the canyon the water was healthy and I thought it looked like Icicle Creek at high water. In fact, it was juicy, not too high, but it had plenty of water. If this is low I wonder what high looks like. I asked Jared. 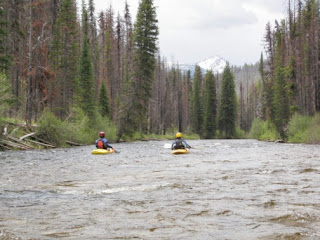 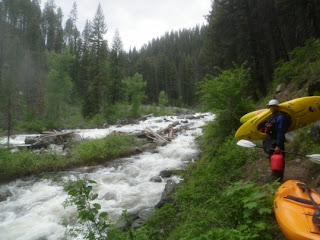 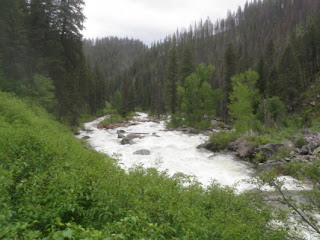 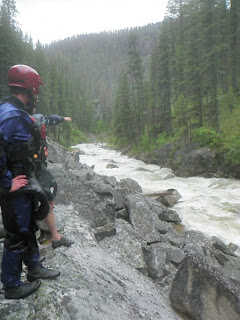 With Jared routing us through most everything on the river the only scout we had was a crux move in the miracle mile. The miracle mile was a mile or so of stacked class V whitewater. At this point my loaded creek boat became my friend not my enemy with its weight carrying me down stream punching holes I didn't want to stay in. 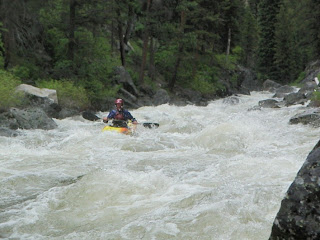 Jeff coming through the end of the miracle mile. 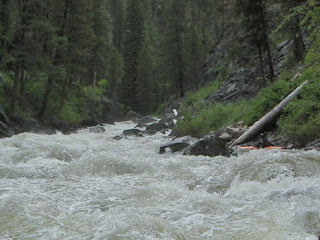 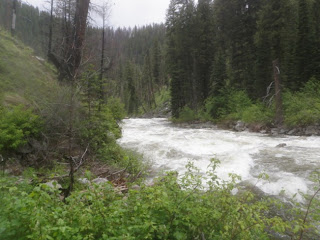 After the Miracle Mile the river let up in grade but not in gradient. Here is a calm section of the Secesh as we flow down stream catching one eddy in 5 miles. In all we had one portage, one scout, and only five eddies were caught on our 15 + miles of class IV-V blur of whitewater. Thanks to Jared and Boyce for leading. I feel we would have been on the river a lot longer if we were on our own. Stunning scenery and hands down, some of the best paddling I've done. The Secesh felt like rugged remote Idaho and we were only getting deeper into the canyon, about to get into the big water. 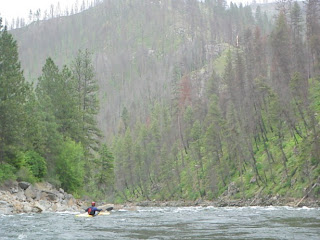 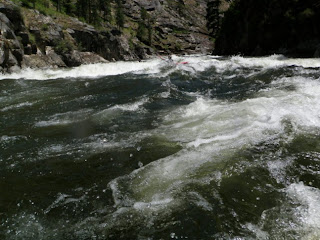 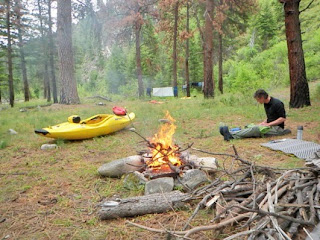 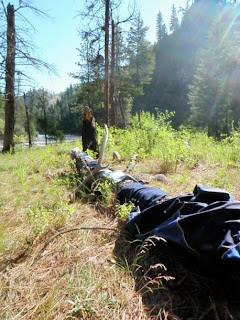 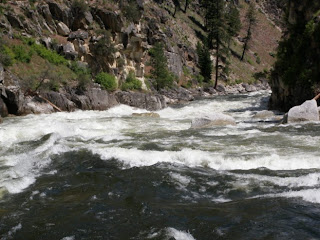 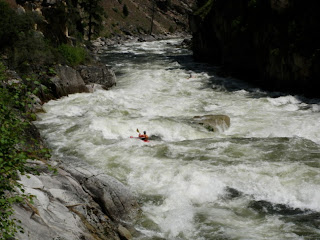 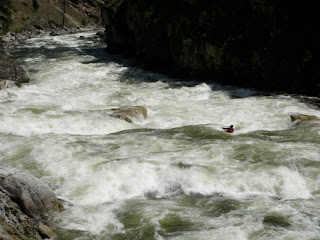 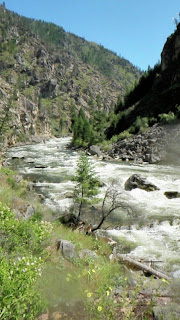 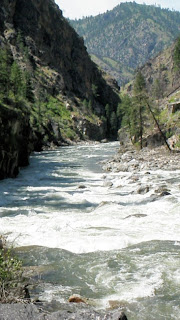 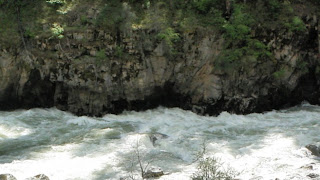 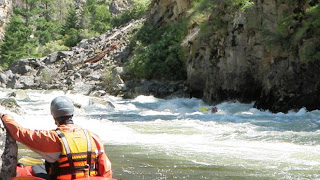 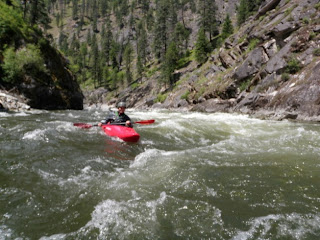 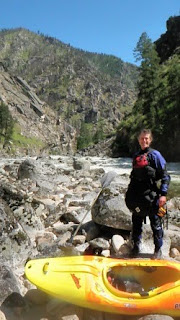 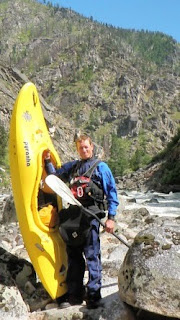 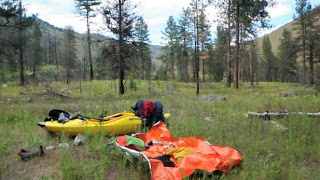 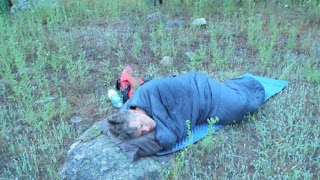 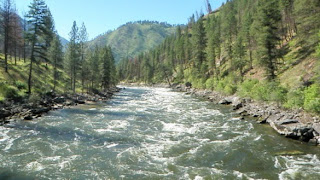 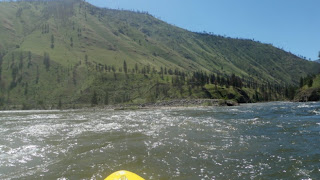 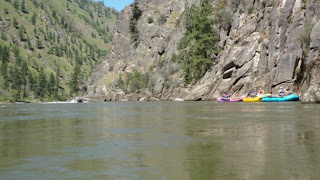 I know that this is 2+ years in the future of this post but your writing is spot on, sir.