If you look on a map, Chelan is pretty much in the middle of WA. The eastern side of Washington's Cascade Mountains hold many whitewater canyons that run every year in the spring. The Cooper and Cle Elum, Icicle Creek and thundering Tumwater Canyon offer bountiful whitewater options. Nason, Ohanepecosh, Robe, Top Tye, Foss...  are all super classic sections and each one will paste a smile on yo face, pretty much every time.


Usually there are a few class V options left by the time Sept rolls around, but you gotta hike. Tumwater maintains boatable flows as fall approaches, but other than this roadside paradise there's nothing, aside from a few obscure intimidating box canyons... well, except for Chelan.

The Chelan Gorge annual releases are part of an agreement involving the Chelan County P.U.D. and American Whitewater. One weekend a year the dam gates open and class V paddlers are welcomed into one of Washington's most dramatic class V canyons. 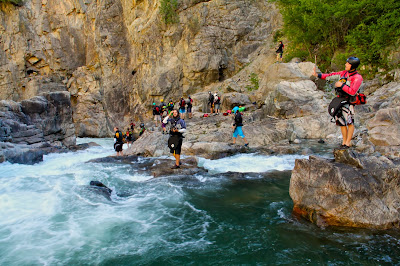 Well...  ya know how.. when you're looking through the guidebook for some sick new class V run you haven't been on and it winds up being like 7 miles long with 2 hard drops and a bunch of boogie and flat water?? Well.. Chelan just throws out all the in-between and you're left with a half mile of back-to-back steep class V bedrock stouts. 75 degree water temps combined with a 2 mile class II warm-up could be the ingredients that make Chelan the perfect late summer run. It's more fun every time I go, and watching the number of paddlers increase every year, I won't be surprised when we need MORE releases!! Chelan is sick. 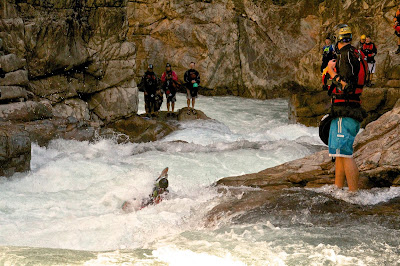 Once past a handful of class III-IV drops, the main gorge appears abruptly, as the river falls away through the first series of class V hydraulics and ledges known as Entrance Exam. Rock walls soar hundreds of feet above. The only other place I've been that could compare would be one of the side hikes in the Grand Canyon.

In late spring Chelan P.U.D. releases up to 10,000 cfs through this little miracle canyon scouring it clean all the way down to the bedrock. Sunday is the higher of the two days when kayakers go in there, and it's about 410 cfs. Sat is about 370. This canyon only adds to the desert appeal on the beast side of WA's Cascade Mountains. Sick! 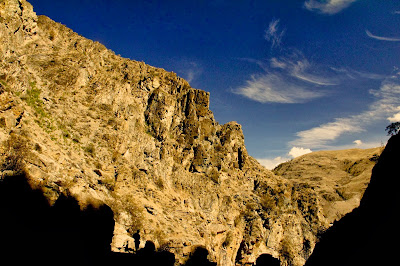 Entrance Exam is the first and largest class V drop, beginning with 2 back-to-back sloping ramps, each driving down into seamy holes, respectively and concurrently! As you emerge from the second hole immediately scramble into a quick eddy on the right before the next back-to-back sequence. After getting the signal from your safety crew that the holes below are free and clean... peel out and boof left off the prominent 12 foot tall green spout. Take a good left stroke and forget about trying to use the shallow right flake that looks so inviting. Boof out to the left, landing forward. Land and get your boat straight for the next 5 foot pourover hole. Aim for center or slightly left and boof straight, downstream, through the hole. The hole will slow you down, but the current immediately turns and puts you into an eddy for the last mooove. As long as you were far enough left. Go off on the right, or (lord help you) sideways?! Well, don't swim. You don't wanna swim there.

After catching the eddy above the final charge, catch your breath... you might be about to get a good hole beating and not know it. I swear this last move is what makes EE so nerve racking. Even if you swim, the water is 75, air temps are somewhere between 90 and 100, and there are at least 6 throw bags that will criss-cross you as you, your boat AND paddle lazily float out of the hole to a small outcropping seemingly designed for self rescue!! Chelan is the SHIT!!!

The canyon is also very portagable and scoutable. Every drop can be portaged with varying degrees of effort. Did I mention how amazing the bedrock is?? You'll probably spend at least an hour at Entrance Exam watching everyone go through, one at a time. Then, the whole group begins to move to the next drop as safety is set up. Double Slide is next, and if Entrance Exam increased your pucker factor, it might be worth portaging.


Double Slide is a 20 foot drop, and just as the name implies, has two side-by-side drops. The left side is "the sneak", but not an easy line to get to. First, you have to punch a hole between the left wall and a boulder. The hole is a funny shape and the rock helps to back it up some, making it stickier than it looks as well as a bit depressed, making it very difficult to work out of. Punch that effing hole! Then paddle hard at to get over the final little flake, ahhhh. Mess these moves up and you just bought yourself a one-way ticket down the right chute, into the Meat Locker!!!

Rick Williams was the very first kayaker to ever run the right side of Double Slide. Rick was known for his big-water skills as well as innovative paddling techniques (and catchy names of rapids ;). He named this right slot Chelammy!!  A fitting title, no doubt! Meat Locker, Chelammy... it's a gorge beast sanctuary! Sammy G was the only stud brave enough to run the Meat on Sat. Sam loves utilizing his new bionic prowess.

After the procession, everyone was stoked to fly off Super Boof, a sweet 15 foot boof. If there was an easy way back up, I'd crank boofs off that thing half the day!!! Immediately downstream is Throne. Throne is a 20 foot tall sliding drop with a powerful hole at the bottom. Go too far left and you'll get pushed into the throne-shaped rock on the left. The right half of the hole at the bottom of Throne is a very powerful, possibly backed-up hole that people have fully disappeared in for a 2 count, only to be shot upstream, back out of the hole. Chelan is SICK! 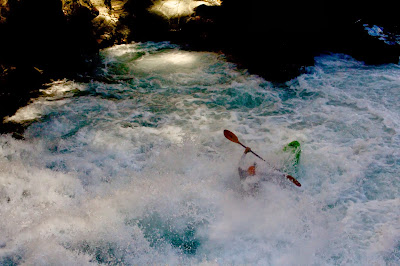 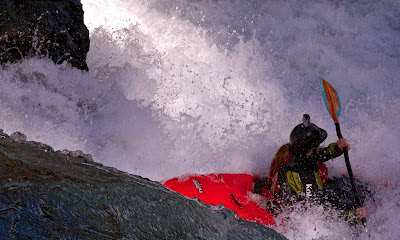 Catch an eddy on either side and be quick about it, a 30 foot tall double drop known as Pinnacle is next. Pinnacle was portaged up until the final day of the final flow study in 2011. Rob McKibbon successfully made the first descent to the cheers of all of us mortal paddlers. 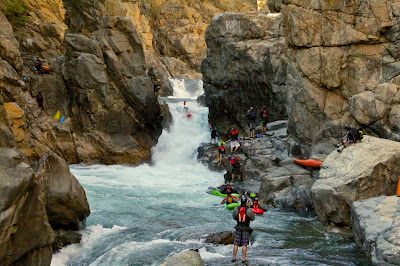 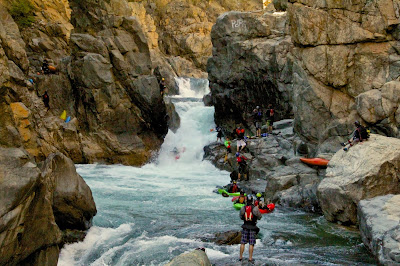 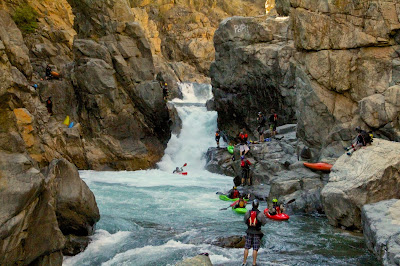 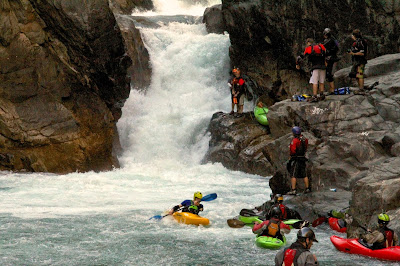 As is Chelan's style, there is another loss in gradient just below Pinnacle known simply as The Boulder Sieve. This is a mando portage and it's recommended to have at least one person on the "portage rock" to help paddlers get up and over the sneaky slab rock on the left. If ever there were a situation that a paddler didn't make it over the slab rock, missing the sieve... 95% of the water flows under a big boulder pile. That said, caution should always be taken and appropriate safety set at every drop on this run. Safety is of the utmost importance and it's easy to do in here. It is a privilege to paddle this canyon and many people have put in a lot of their time and many real dollars to achieve the releases we have. Let's not lose this great resource. It is our responsibility to keep everyone safe and these resources open! CHELAN is SICK!!


After sliding down the left sneak at Boulder Sieve there are several IV-ish drops before the next sequence starts, Extra Credit, a fun series of small ledges and slides curling around the corner and under the bridge 500 feet above. There are eddies on the left toward the bottom. One eddy marks the beginning of the final boulder garden, Fat Lady. Be careful, there are some tight funky slots in here and a rock siphon makes the very last twisty drop. Set safety at this spot. If things go bad here it'll happen faster than you can get out of your boat.

By now you've exhausted all but the last 2 feet of vertical gradient from the Chelan Gorge. Paddling across the short pool, portage the log jam on the right, continuing down the right channel to the park at the confluence! Consume booty beers, load up and head to the horseshoe pit! The nightlife is but a few hours away. Chelan is one of the sickest weekends all summer, fo sho! 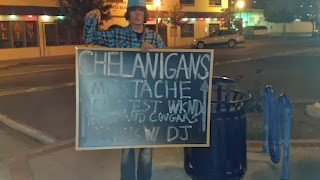 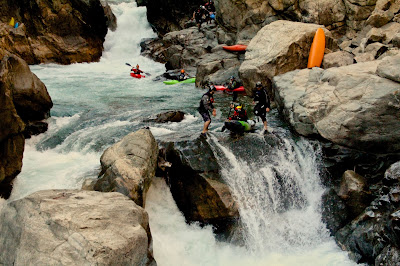 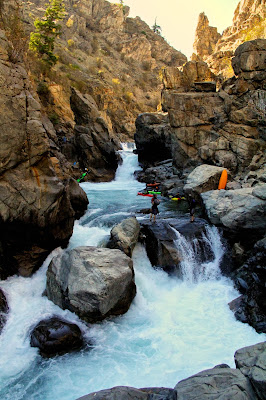