Nomads and the SF Sauk


"Two roads diverged in a wood, and I,
I took the one less traveled by,
And that has made all the difference"
-Robert Frost

I've always been one to explore and push it a little. Exploring my own limits mostly. When I got my first mountain bike I figured out how to ride down stairs and haul ass in rush hour traffic pretty quick. I liked seeing new things and places. A few close calls, but I never got squished during all those lane changes, curb jumps, populated-stairway-descents (even when I had to stop halfway down for some girl who had to tell me I was endangering lives pulling a stunt like this). I stopped long enough for her to say her peace as she stood defiantly in my path. I never put a foot down, just let her finish and focused on the middle of my bars. People turned around to see what was happening, then parted as I slowly ka-lopped down the other 212 treads.

I remember the first time I ran the Foss, I was with Rob McKibbon and Andy Bridge. At that time I had been paddling 5 or 6 years, but had only done a handful of rivers. I remember telling Andy that I was scared and this was some of the biggest stuff I had ever paddled and he told me that I just needed to paddle more rivers.

I took his advice. This year started out with big plans and high hopes. I spent a lot of time on the Olympic Peninsula, spent a lot of time exploring in general. Had to deal with the first real injury of my life and.. well, had to pull back some to allow myself to heal. I've never thought twice about anything I've ever physically done. I used to jump off roofs, roller blade down hills at 40 mph, passing cars. Rode through rush hour traffic downtown Seattle on a mountain bike... a lot. I've always been one to need to see new places and have a constant supply of fresh stimuli to keep my going and maintain a feel of breakneck speed. I won't tell you how many transmissions I've gone through.

One day, I was paddling with my good friend and fellow Creek Side nomad, Kris Wilson. We met up at a little creek in the North Cascades around 9am. He'd camped the night before and since I was a bit "late" he decided to paddle the first lap solo. By the time I showed up he'd already completed the run and jogged the shuttle. I met him as he was driving back down from the put in. "It's LOW dude!" were the first words out of his mouth as we greeted each other with ear-to-ear grins. I figured he would've already done a lap before I got there even though I left Seattle at an early hour. That's Wilson for ya. That guy's soloed more hard stuff than just about anyone and he's one of my closest friends. The first time I ever talked to him we spent 3 or 4 hours on the phone and knew pretty quick we had the same blood coursing in our veins.

We cracked a couple beers and flipped through the Bennett Book, to decide what our next run of the day would be. Sure it was 9 am, but we were in the woods on a fine spring day with nothing more important to do than discover what else was out there to bomb down!

After a fair bit of deliberation (read=more that 2 minutes) we decided on something in the Skykomish drainage. From where we were I figured it was going to take a good couple hours to get there and there wasn't going to be a straight shot. There were two routes, one I hadn't been before. Being of the nomadic persuasion, our path was clear. 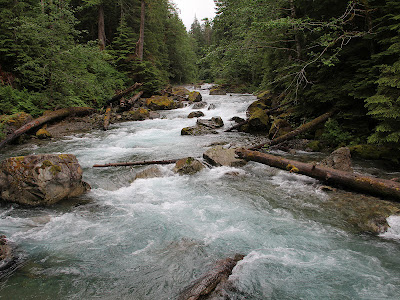 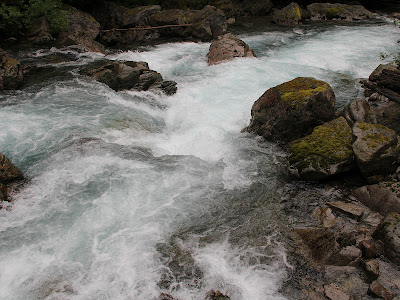 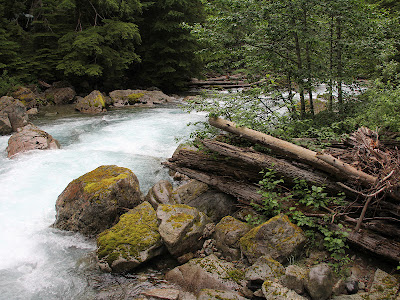 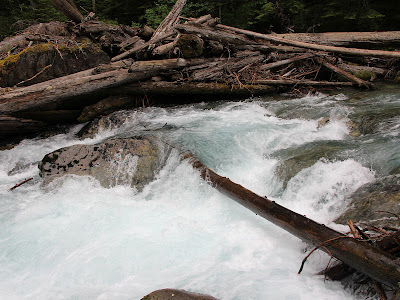 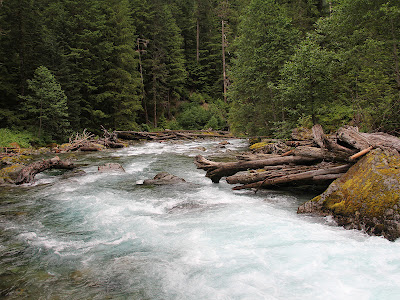 Our destiny laid unwritten as we drove south following the Sauk River upstream to Barlow Pass and the forgotten mining town of Monte Cristo. Finally the Sauk disappeared and another very boatable stream came into view not long after. The South Fork of the Sauk which I had never heard of bumped along, of the class II-III variety. It was pretty and the water was clear. A pleasant feeling overtook me at the discovery of the unexpected. Soon enough the character changed and became class IV, then V. It didn't take long for our wanderlust to kick in as we hatched a plan. Did I mention the SF Sauk is quite roadside? 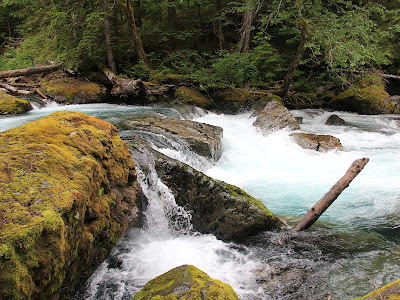 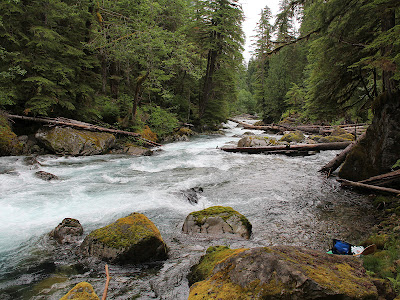 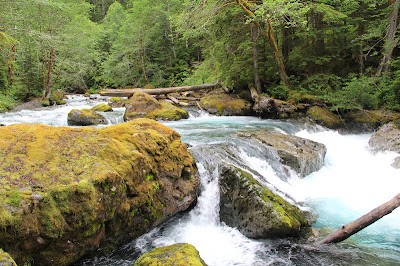 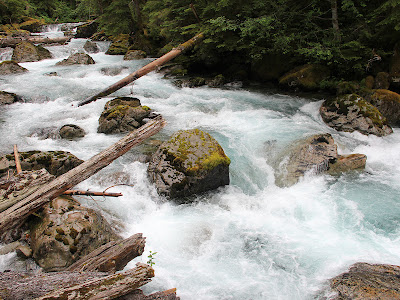 Soon enough we were at a fine spot to get in. We were off. The continuous nature and gradient matched the SF Sauk's big sister, the Cascade River. Lots of great IV-IV+ with just the right amount of class V made this newfound roadside gem a perfect way to celebrate an early start to this day. We would revel in our discovery for weeks to come! 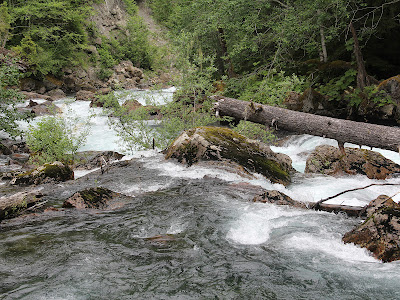 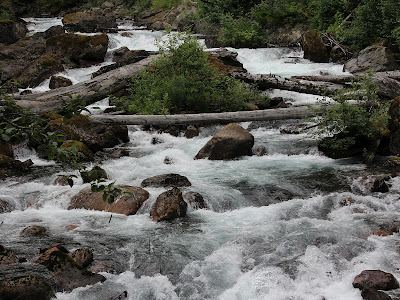 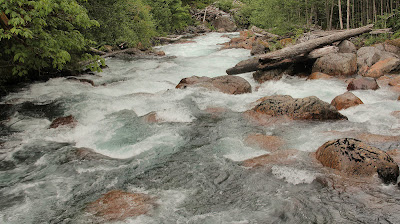 We did a great little section with lots of continuous IV-V boulder gardens, ledges and boofs. It was all I could think about. The following weekend a group came up from Portland and we did the same stretch again following a stellar run on Robe Canyon!! We camped up near Barlow Pass as I tried to convince them to 'pass' on Ernie's Canyon, a section of the NF Snoqualmie (a really looong drive), instead to explore more of the SF Sauk with me. They passed on my idea, but I had a fever... and, well.. Bruce Dickinson wasn't around and I had left the cowbell at home. So there was only one thing to do, put on at the top.. 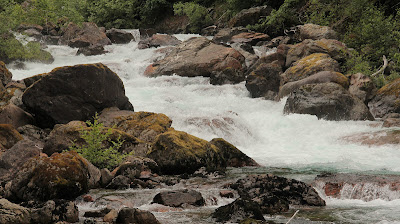 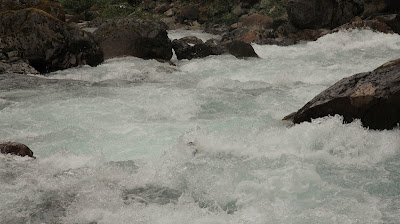 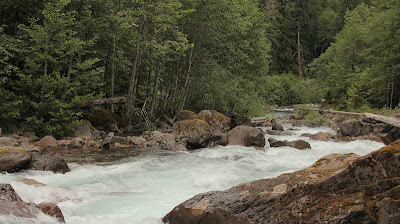 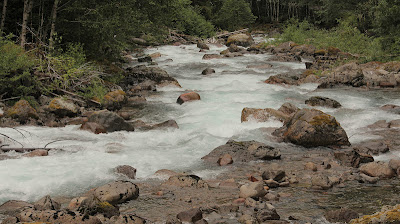 I put on about 8am and was pleasantly surprised with more of the same character as was on the lower section in a slightly smaller river bed. There was a fair bit of wood, but there seemed to always be a way through. I got out to scout a few times, but overall the character was reasonably clean with some really great drops and continuous nature. Stoked!! By now I had driven this section of road a few times and knew there was a lake which split the run into an upper and lower section. I was just going to run the upper and hike back to the van. Did I mention this area is chocked full of meth-heads?? Watch your stuff in here. I got back to the van around 11:30am to find 3 of my windows had been 'dusted' off (it's pretty dusty, too) as if someone were peering in... don't leave anything you aren't willing to part with if you do this section. Fortunately, the windows were still in tact and everything safe and sound. SF Sauk is a hit!! 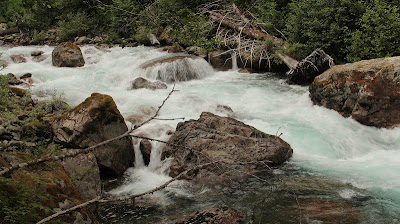 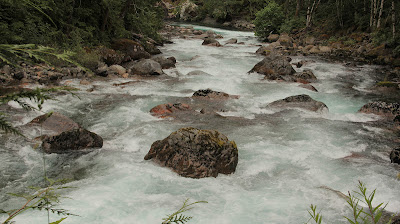 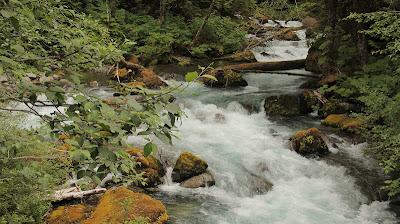 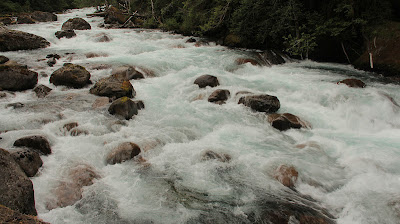 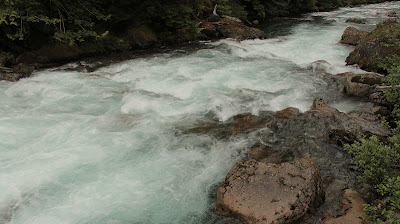 Overall I would rate the two sections IV+ (V) at the lower end, and solid V as levels rise. The continuous nature combined with wood and sieves will require paddlers to stay on their toes all the way to the take out! Plenty of good boat scouting for experienced class V paddlers as well, which was good for my knee as it was still not 100%. If a big flood or some hungry beavers made homes here this section would get even better. As this stretch gets paddled more the lines will become more defined and it will certainly be a good alternative if Robe is too high in the fall or locals are looking for something off the beaten path to explore. It's worth doing and you can be this Creek Sider will be back! Until then, thanks for stopping by. Happy boofing to all and to all.. a good flight.